Why is this evidence so feared by the dark forces?

Bell’s theorem is a politically and sociologically sustained belief system. In 1964 John Stewart Bell proved a mathematical theorem and claimed that “no physical theory which is local and realistic (in the sense espoused by Einstein) can reproduce all of the statistical predictions of quantum mechanics.” However, in a series of papers written between 2007 and 2014 I constructed just such a local and realistic framework for physics. Consequently, today Bell’s theorem no longer has the fundamental significance for physics it was thought to have.

In a nutshell, my disproof of Bell’s theorem goes as follows: In 2007 I noticed that there is a serious error in the very first equation of Bell’s famous paper [Physics 1, 195 (1964)]. Bell simply made an elementary but fatal mistake, and this mistake lies in the formulation of the very first equation of his famous paper. The correct form of his proposed functions to reproduce the quantum correlations local-realistically must be

for them to provide a complete local description of the physical reality demanded by Einstein. The latter form, with

, is what Bell assumed in the first equation of his paper. But the complete description can be provided by such functions if and only if their codomain is an absolutely parallelized 3-sphere,

, which is a closed set of unit quaternions, homeomorphic to the fermionic rotation group SU(2):

of the spin system is represented by the initial orientation of the 3-sphere, and the results

are limiting cases of

for the rotation angles

. Note also that a 3-sphere cannot be charted by a single coordinate system, but an anholonomic frame, made up of graded basis

, can be defined on it, fixing each of its points uniquely. It is the impossibility of defining a global coordinate chart on

but possibility of defining an anholonomic frame on it that is ultimately responsible for the existence of EPR-Bohm correlation. 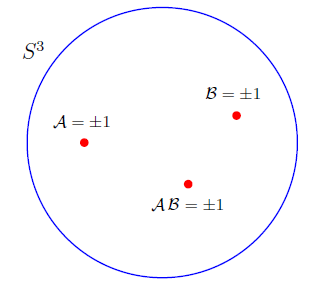 It is very important to note that the image points of both forms (1) and (2) of the above functions, namely the measurement results

themselves, are the same:

They are exactly what Bell assumed them to be in his first equation. Only the codomain of the two forms of the functions differ from each other. Failing to take the physically and mathematically correct codomain into account, Bell’s argument is thus indeed a non-starter. That is to say, his argument simply does not go through without the assumption of totally disconnected set

is relatively easy to reproduce in a strictly local and realistic manner. In fact, once the topology of the codomain of the measurement functions

is correctly taken into account in the above manner, the observed EPR-Bohm correlation predicted by quantum mechanics inevitably falls out as a classical, deterministic correlation among the points of an absolutely parallelized 3-sphere. This is a robust result. It is not difficult to prove that correlation between any two points

is necessarily equal to

being the limiting cases of

, respectively. Thus all the perplexity generated by Bell’s impossibility claim is much ado about nothing. It stems from a topologically incorrect accounting of measurement results. 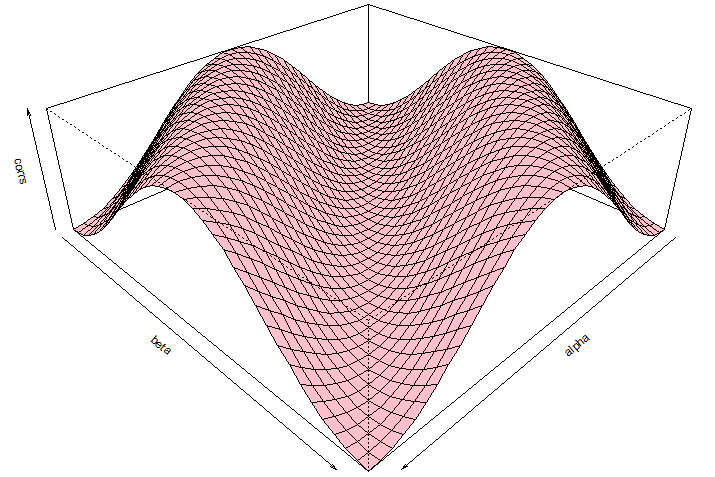 You can verify these facts in an explicit computer simulation of the model, as discussed in this paper. At least five explicit, event-by-event, numerical simulations of my local model for the EPR-Bohm correlation have been independently produced by five different authors, with codes written in Java, Python, Mathematica, Excel VB, and “R“. The above 2D-surface version of the simulation of my local model can be found here. I discuss two of these simulations in the appendix of this paper. A compact translation of one of these simulations (from Python to Mathematica) can be found here. Each simulation has given different statistical, geometrical, and topological insights into how my local-realistic framework works, and indeed how Nature herself works.

The most accurate simulation of my local model for the EPR-Bohm correlation can be found here. 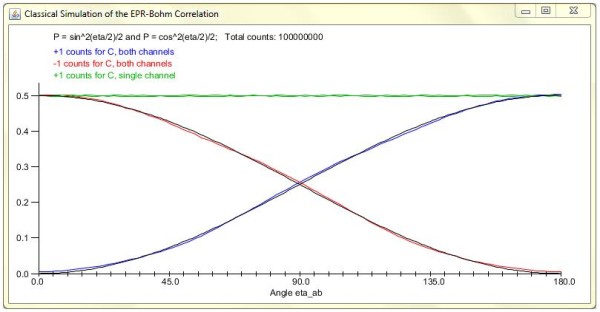 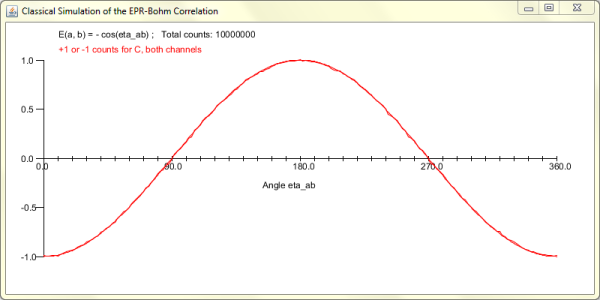 But what about the famous Bell-CHSH inequality on which Bell’s supposedly iconic theorem is based? It turns out that it too can be violated local-realistically. In doing so, however, we gain a tremendous insight into the very origins of quantum correlations. This is discussed in greater detail on the next page, but first let us recall that for the set of four measurement directions, a, a

, and b, the Bell-CHSH inequality, which claims an upper bound on local-realistic correlations, is given by

provided we assume the corresponding measurement functions to be of the incorrect form (2) assumed by Bell. Thus it is in this step—the crucial step in the derivation of Bell-CHSH inequality and the proof of Bell’s theorem—that the assumption of incorrect codomain gets smuggled-in. The four pairs of measurement results occurring in the above expression clearly cannot all occur at the same time. If, however, we conform to the usual assumption of counterfactual definiteness and pretend that they do all occur at the same time at least counterfactually, then we must specify the correct codomain for the functions

to represent them correctly. But for the measurement functions of the form (1) with the correct codomain

the story turns out to be dramatically different from (6). Because then the measurement results

occur as points of an absolutely parallelized 3-sphere, which is the set

of unit quaternions. As a result, we must specify the joint probability distribution for the occurrence of the four pairs of measurement results on such a 3-sphere, defined by the graded basis

. Consequently, the upper bound on the correlations depends on the torsion

at each point of the manifold

This upper bound has been derived in detail in the last appendix of this paper. This derivation has also been numerically verified in a GAviewer by Fred Diether and myself. It is of course exactly what is predicted by quantum mechanics. Thus, with the topologically correct choice (1) for the measurement functions, not only the strong correlations (5) but also the upper bound (7) on the correlations turns out be exactly what is predicted by quantum mechanics.

More importantly, the above derivation reveals a crucial role played by the non-vanishing torsion in our physical space on the strength of the observed correlations. If the physical space in which the measurement events

are occurring has vanishing torsion, then the correlation between these events cannot be as strong as those predicted by quantum mechanics. But vanishing torsion is precisely what all derivations of Bell-CHSH inequality unwittingly assume (see, for example, the discussion in this paper). Note also that parallelizability of spaces by torsion is a topological concept. A toy example of how topology can strengthen the observed correlation can be found in the first appendix of this paper.

Needless to say, the above discussion is merely a sketch of my disproof. In particular, I have glossed over the important issue of how errors propagate within a parallelized 3-sphere (a detailed statistical analysis of which can be found in this paper). Moreover, in my book I have shown that, not only the simple EPR-Bohm-type correlations, but ALL quantum correlations can be reproduced purely local-realistically in an analogous manner. For more general cases, however, the codomain of the measurement functions such as

must be extended to the absolutely parallelized 7-sphere. Thus quantum correlations in general turn out to be nothing but classical, local, and deterministic correlations among the points of an octonionic 7-sphere. On the next page I discuss how the parallelizing torsion

within such a 7-sphere is responsible for ALL quantum correlations.

The argument I have presented above is experimentally testable. I have proposed a macroscopic experiment for this purpose. Further discussion about this experiment can be found on this page.

PS: A theoretical computer scientist, Paul Snively, has crystalized the essence of my argument in a logical sequence that I find quite interesting. According to Snively the logic behind my refutation of Bell’s theorem is:

A brief discussion of what he means by this sequence can be found on this page of his blog.

He summarizes the main point thus: “Dr. Bell used scalar algebra. Scalar algebra isn’t closed over 3D rotation. Algebras that aren’t closed have singularities. Non-closed algebras having singularities are isomorphic to partial functions. Partial functions yield logical inconsistency via the Curry-Howard Isomorphism. So you cannot use a non-closed algebra in a proof, which Dr. Bell unfortunately did. … This is a sufficient disproof of Bell’s theorem.”

Let me add to Paul’s observation that, not only Bell’s original 1964 proof, but *ALL* of the proofs of *ALL* of the Bell-type theorems, including the proofs of their variants and generalizations such as Hardy’s theorem or GHZ theorem, use only scalar algebra. Therefore all such no-go “proofs” are logically inconsistent (i.e., they are nonsense).

Bell has been credited for discovering the mistake in von Neumann’s “no hidden variables” theorem even though both Einstein and Grete Hermann had discovered von Neumann’s mistake some 30 years before Bell did.

Now Bell does have a nice and succinct explanation of von Neumann’s mistake in section 3 of the first chapter of his book. At the end of his section 3 Bell says something that is quite ironic in my view.

Bell writes: “Thus the formal proof of von Neumann does not justify his informal conclusion. … It was not the objective measurable predictions of quantum mechanics which ruled out hidden variables. It was the arbitrary assumption of a particular (and impossible) relation between the results of incompatible measurements either of which might be made on a given occasion but only one of which can in fact be made.”

How ironic! That is precisely the mistake Bell himself has made in his own famous theorem, as I have explained in section 4 of my Royal Society paper and in this preprint. 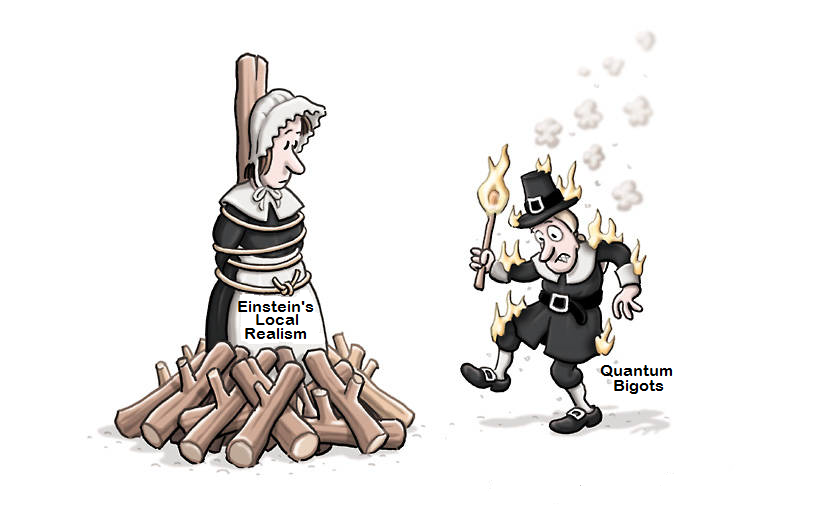 26 Responses to Disproof of Bell’s Theorem